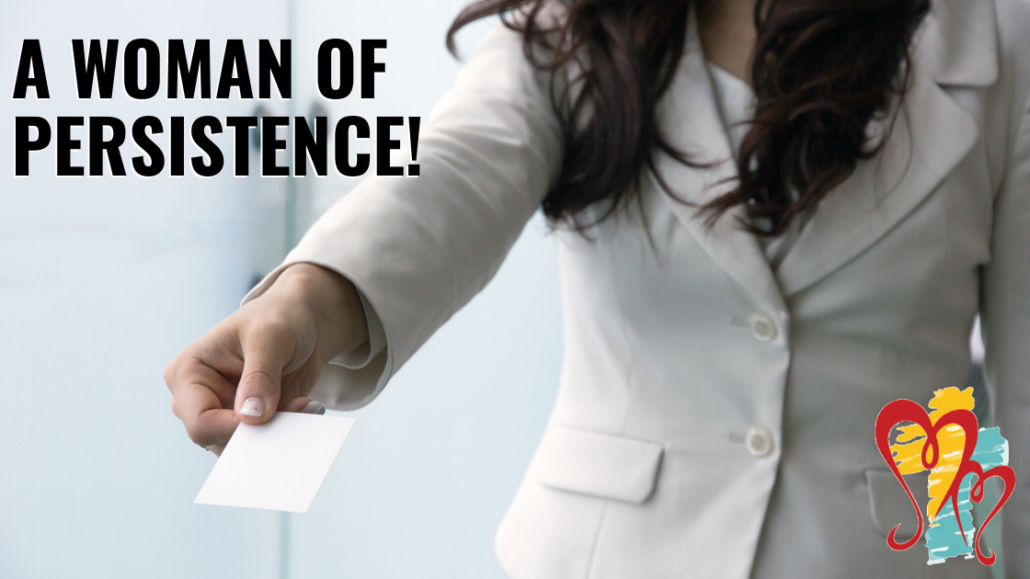 You are persistent, especially when you really want something! Am I right?

What comes to mind when I ask what you last sought after and pursued with persistence until you succeeded?

I once had a writing coach say if we hadn’t written what we planned, then we probably didn’t really want to or were not called to write it in the first place! I was surprised at my strong reaction to her words! I diligently considered if what I had planned to write was assigned to me from the Lord or not. If not, it needed to be set aside so I could focus on His true calling on my life as a writer. If yes, I needed to buckle down and be persistent until the writing was complete!

We’re awaiting (somewhat patiently) the birth of our 11th grandchild; our 8th grandorable daughter! I just wrote a blog about the obedience of the Hebrew Midwives that led to great influence upon the Isrealite nation, the Egyptian nation, and subsequently upon our world.

Read here: A WOMAN OF INFLUENCE!

You are a woman of Influence.

Then I thought of Hannah and all those who are mothers and grandmothers, and/or may not have born children of their own, but are surrogate mothers of sorts! What would we do without them? They are faith-FULL! They are patient and persistent in their care. 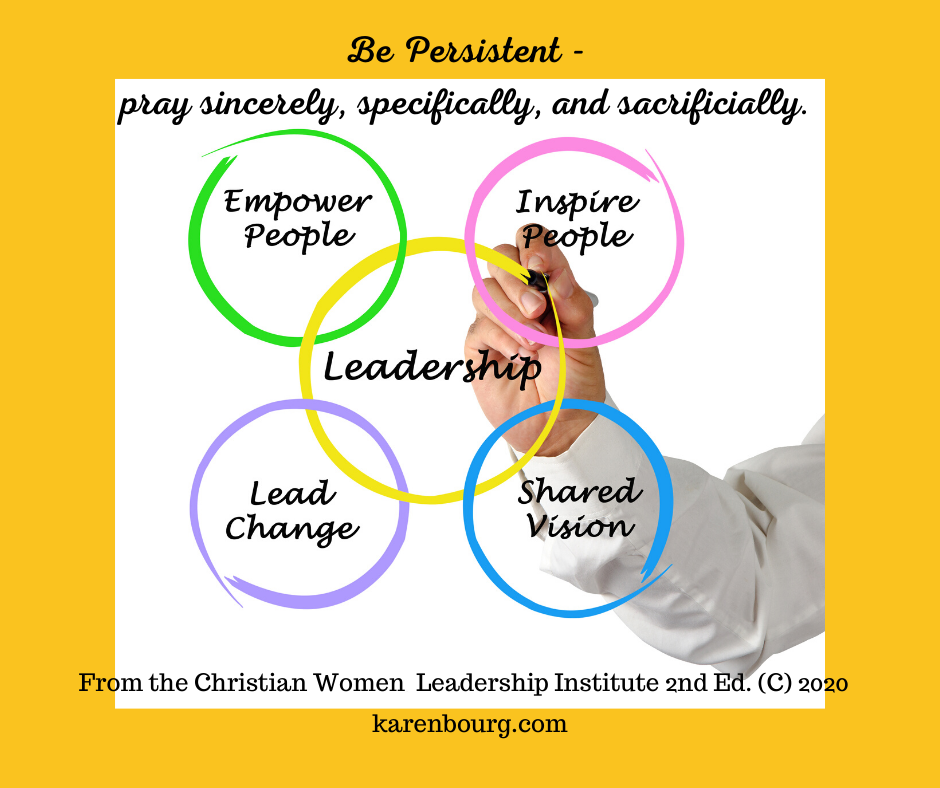 A Woman of Persistence – Does NOT Give Up!

Be persistent in your faith and petitions to God. In most cases, He has given you the desires of His/your heart and being filled with faith, He expects you to obediently pursue those desires and to bring Him glory and honor every step of the way.

Consider Hannah in 1 Samuel who was so persistent in her faith-filled prayer for a son that God granted her desire and then some! (1 Samuel 2:21 – she had other children) She was persistent and faithful.

In her day, a barren woman was scorned, ridiculed, even mocked. In her distress, instead of attacking her mocker, she cried out to God from her great sorrow and loss, praying earnestly, even begging for a son. Her prayer was sacrificial, sincere, and specific. Her prayer changed the course of her life, her son Samuel’s life, the Priest Eli’s life, and the life of the entire nation!

1 There was a certain man of Ramathaim-zophim of the hill country of Ephraim whose name was Elkanah the son of Jeroham, son of Elihu, son of Tohu, son of Zuph, an Ephrathite. 2 He had two wives. The name of the one was Hannah, and the name of the other, Peninnah. And Peninnah had children, but Hannah had no children.

3 Now this man used to go up year by year from his city to worship and to sacrifice to the Lord of hosts at Shiloh, where the two sons of Eli, Hophni and Phinehas, were priests of the Lord. 4 On the day when Elkanah sacrificed, he would give portions to Peninnah his wife and to all her sons and daughters. 5 But to Hannah he gave a double portion, because he loved her, though the Lord had closed her womb.[a] 6 And her rival used to provoke her grievously to irritate her, because the Lord had closed her womb. 7 So it went on year by year. As often as she went up to the house of the Lord, she used to provoke her. Therefore Hannah wept and would not eat. 8 And Elkanah, her husband, said to her, “Hannah, why do you weep? And why do you not eat? And why is your heart sad? Am I not more to you than ten sons?”

9 After they had eaten and drunk in Shiloh, Hannah rose. Now Eli the priest was sitting on the seat beside the doorpost of the temple of the Lord. 10 She was deeply distressed and prayed to the Lord and wept bitterly. 11 And she vowed a vow and said, “O Lord of hosts, if you will indeed look on the affliction of your servant and remember me and not forget your servant, but will give to your servant a son, then I will give him to the Lord all the days of his life, and no razor shall touch his head.”

12 As she continued praying before the Lord, Eli observed her mouth. 13 Hannah was speaking in her heart; only her lips moved, and her voice was not heard. Therefore Eli took her to be a drunken woman. 14 And Eli said to her, “How long will you go on being drunk? Put your wine away from you.” 15 But Hannah answered, “No, my lord, I am a woman troubled in spirit. I have drunk neither wine nor strong drink, but I have been pouring out my soul before the Lord. 16 Do not regard your servant as a worthless woman, for all along I have been speaking out of my great anxiety and vexation.” 17 Then Eli answered, “Go in peace, and the God of Israel grant your petition that you have made to him.” 18 And she said, “Let your servant find favor in your eyes.” Then the woman went her way and ate, and her face was no longer sad.

19 They rose early in the morning and worshiped before the Lord; then they went back to their house at Ramah. And Elkanah knew Hannah his wife, and the Lord remembered her. 20 And in due time Hannah conceived and bore a son, and she called his name Samuel, for she said, “I have asked for him from the Lord.”[b]

Samuel Given to the Lord

21 The man Elkanah and all his house went up to offer to the Lord the yearly sacrifice and to pay his vow. 22 But Hannah did not go up, for she said to her husband, “As soon as the child is weaned, I will bring him, so that he may appear in the presence of the Lord and dwell there forever.” 23 Elkanah her husband said to her, “Do what seems best to you; wait until you have weaned him; only, may the Lord establish his word.” So the woman remained and nursed her son until she weaned him. 24 And when she had weaned him, she took him up with her, along with a three-year-old bull,[c] an ephah[d] of flour, and a skin of wine, and she brought him to the house of the Lord at Shiloh. And the child was young. 25 Then they slaughtered the bull, and they brought the child to Eli. 26 And she said, “Oh, my lord! As you live, my lord, I am the woman who was standing here in your presence, praying to the Lord. 27 For this child I prayed, and the Lord has granted me my petition that I made to him. 28 Therefore I have lent him to the Lord. As long as he lives, he is lent to the Lord.”

And he worshiped the Lord there.

A Woman of Persistence Can Impact the World!

Your life and ministry/business can influence a nation!

Your persistence in your life and entrepreneur endeavors can impact the world!

Honestly, I can’t think that broadly most of the time.

I’m content to try to wrap my heart around and try to influence and persistently work to impact just 1 person at a time!

But then I remember that Hannah’s persistent prayer changed the course of her life, the lives of her family, and the life of her world and yours and mine! God used her son Samuel as a powerful prophet during the lifetime of King David and we read about him today. God used King David to lead the nation and to complete the lineage of Christ and today we are Saved!

God delights in the faith and persistence of His people!

Be a Woman of Persistence!

Re-Write Hannah’s Prayer as your own!

2 1 And Hannah prayed and said,

“My heart exults in the Lord;

my horn is exalted in the Lord.

My mouth derides my enemies,

because I rejoice in your salvation.

for there is none besides you;

Talk no more so very proudly,

let not arrogance come from your mouth;

for the Lord is a God of knowledge,

and by him actions are weighed.

The bows of the mighty are broken,

but the feeble bind on strength.

Those who were full have hired themselves out for bread,

but those who were hungry have ceased to hunger.

The barren has borne seven,

but she who has many children is forlorn.

The Lord kills and brings to life;

he brings down to Sheol and raises up.

he brings low and he exalts.

He raises up the poor from the dust;

he lifts the needy from the ash heap

to make them sit with princes

and inherit a seat of honor.

For the pillars of the earth are the Lord’s,

and on them he has set the world.

“He will guard the feet of his faithful ones,

but the wicked shall be cut off in darkness,

The adversaries of the Lord shall be broken to pieces;

against them he will thunder in heaven.

The Lord will judge the ends of the earth;

he will give strength to his king

and exalt the horn of his anointed.”

Community -When you need a Nurturing, Active, group of like-minded Christian Women Entrepreneurs whose goals are to provide Community, Networking, Education and Missions opportunities – join the National Association of Christian Women Entrepreneurs (NACWE) on Facebook http://facebook.com/groups/NACWEFreedom / our Website http://nacwe.org Once you’ve gotten to know us, we hope you’ll consider joining our more Intimate and Elite Group as well. NACWE was established in 2010 and has served thousands of women across the United States AND the world!

Coaching & Writing -When you need small group Coaching/Masterminds and/or Individual Coaching with opportunities for trips, retreats, VIP Days and more to achieve extraordinary levels of success worth celebrating, join Me / Dr. Karen Website http://karenbourg.com/work-with-me  I’ve been coaching since about 2007 when I opened a Private Practice Marriage and Family Therapy/Biblical Counseling Practice and realized to grow took a whole lot more than “when you build it, they will come”! It took knowing how to run a business/ministry God’s Way!

Conference -Also, we hope you’ll consider joining us for our ANNUAL Conference “Working God’s Way” north of Dallas September 18-19, 2020. Our keynote Speaker will be Shae Bynes, Co-Founder of Kingdom Driven Entrepreneur and the Author of Grace Over Grind. http://nacwe.org/savethedate2020conference/ 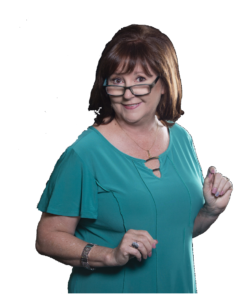 “Achieve Levels of Success Worth Celebrating”

Karen Lindwall-Bourg is the President of the {Inter} National Association of Christian Women Entrepreneurs [est. May 2010] and the new President of the International Christian Mompreneur Network [est. July 2010], both at nacwe.org . She and the NACWE Operations and Leadership Teams work diligently to provide

opportunities to Christian Women Entrepreneurs, Mompreneurs and Nanapreneurs alike all over the world!

Our Core Values are

Karen is wife to Fred, Mommy to 6 kids and 5 in-loves, Nana to “going-on” 12 grandchildren, and treat provider deluxe for a herd of Great Pyrenees who protect their north TX ranch! She is an entrepreneur coach, author, publisher, retreat hostess and more! Learn more about Mastermind groups and “Celebration” coaching with Karen at karenbourg.com.

JOY in the Mourning Scroll to top